; Beskid Slaski - explore it from the kitchen! - Przystanek Góry

Beskid Slaski – explore it from the kitchen! 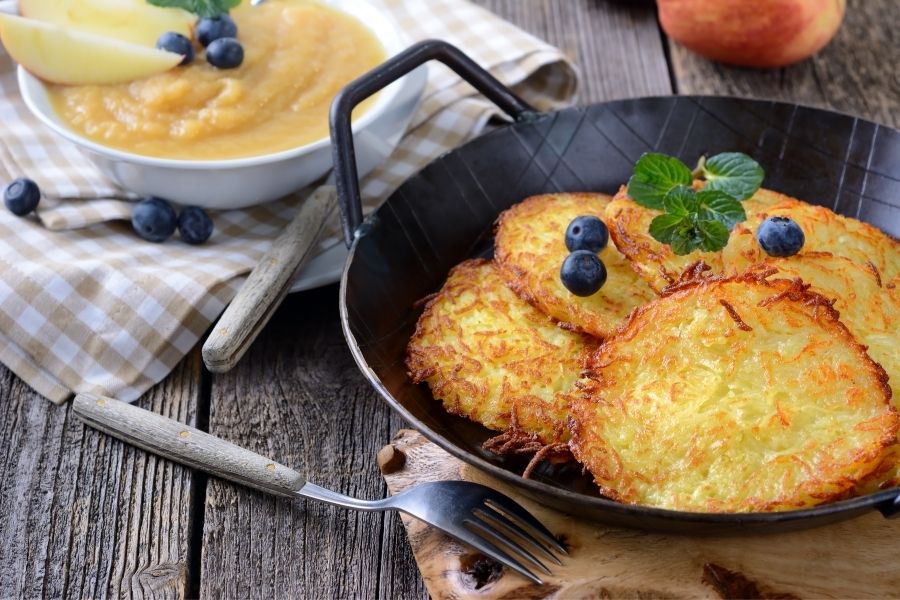 While relaxing in a particular country or region, you should get to know and taste the local cuisine. The cuisine of Beskid Slaski has much to offer and stimulates the taste buds in many different ways. So what dishes are worth trying while in Szczyrk and its surroundings? Read more about it in the next part of this article.

The regional cuisine of the Silesian Beskid offers many different flavours that will satisfy the tastes of even the most demanding gourmets. The less fertile soils and harsh climate have forced the locals to adapt to the region. For this reason, they relied on pastoralism, fishing and beekeeping. Since potatoes were introduced to the area in the 19th century, they have been a permanent feature of the regional cuisine.

They are used as a base for many delicious dishes. When in Szczyrk, you must try poleśniki, available in two versions – yeast dough or potato pancakes. In either version, they are baked in an oven on cabbage leaves. Poleśniki are exceptionally aromatic, and baking without fat adds to their crispiness.

Other potato-based dishes worth trying are sztuchanki – mashed potatoes with fried onions and pork crackling – and potato pancakes baked on a baking tray. From the area of Istebna, Koniaków and Jaworzynka comes kubuś/kubusz. It is a delicious casserole made of raw grated potatoes. After being scalded with hot milk, it is put into a roasting tin, covered with a layer of apples or plums, poured with cream and baked, and tastes delicious.

The regional cuisine of the Silesian Beskids also includes many dumplings or gałuszek. You can find them in different forms and under different names – strzapate, fusate, laid, chybane, ścikane, biołe, szulane or z dziurkóm. They are usually served with pork fat and pork crackling or in a sweet version with butter, sugar, and cinnamon. 2.

Many dishes in Beskydy cuisine are based on sauerkraut. Sauerkraut juice is served solo and in soups such as kapuśniak or kwaśnica. We can also find sauerkraut with zosmozkóm and szpyrkami, with potato roux and pork fat. It is also an addition to meat – ribs, ham or kiszka.

The Skoczów region is famous for its carp bouillon as it is one of the most significant fish reserves in Europe. The taste of carp soup is enriched by diced vegetables and cream, which is used to whiten the dish. We also recommend trying carp croquettes with a bit of bacon. The dough for this speciality is similar to the French, except that beer is added instead of water.

You can’t forget about the cheeses when in the Beskydy Mountains, including Szczyrk. We especially recommend sheep cheese because, as it befits the pastoral area, the taste of bundz offered in this region is unique. According to tradition, it is mainly eaten between May and September during the grazing season. Then, when it ripens, it is processed into bryndza.

Traditional flavours in the Przystanek Góry

Also, in the Przystanek Góry, we appreciate regional dishes. Our guests can eat delicious breakfasts every morning in the form of a buffet. The menu features many products from local producers – including honey, natural sheep cheese and eggs from happy hens. We are glad to welcome our guests to the tastes of Beskid Slaski and take care of their culinary delights.